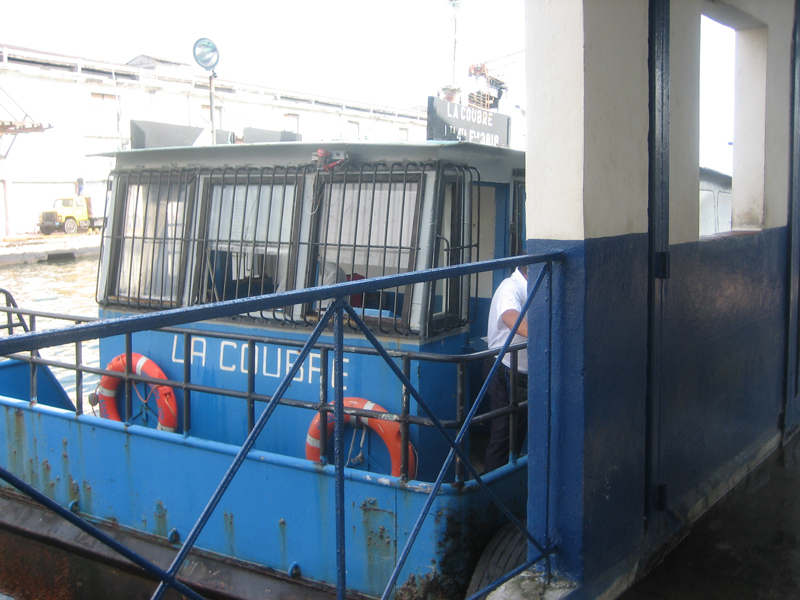 The little ferry which crosses the Havana bay every twenty minutes or so, but once made it all the way to Miami

When my friend and I first tried to get out of Havana, we thought it would be really cool to take the unique old Hershey electric train (which was built by Hershey to transport sugar from the plantations to Havana), to the town of Matanzas. First of all we needed to get to the station which was on the other side of the bay so we walked to the docks and took the little ferry across, instead of going all the way around. This was fun and relatively straightforward, except from having our jar of mayonnaise confiscated which had taken us a long time to procure and was supposed to be part of our lunch! They have some strange security precautions which we found out was because the tiny ferry was once hijacked and sailed all the way to Miami!

Soon we were walking (in the rain and minus half our lunch) towards the little Casablanca train station. It was deserted but we were early for the apparent midday departure so we waited and waited. Eventually after a handful of locals had told us there was no train coming (it seems that sometimes it just doesn’t run, for no particular reason!), we gave up and after a bit more walking through the rain and waiting, managed to find a bus to the Viazul office next to the Zoo. The whole morning had proved completely unproductive and we were back where we started, in the middle of Havana!

Things didn’t get any better as the rather unhelpful lady told us there were no tickets to Matanzas, or to any of our other suggested destinations, until the next day; great! In the end we managed to ask when the next bus was leaving going anywhere. She looked at us strangely but said there was one leaving in an hour going to Viñales. Bingo! We bought the tickets, our moods lifted instantly, and we sat in the waiting room chewing our lunch of dry bread. As we sat on the bus we looked at the positive side of things. We’d chatted to locals, seen some different parts of Havana, and the highlight was the ferry trip across the bay (after we’d forgiven them for the mayonnaise). It had actually turned out to be quite an adventure, and because we’d walked and travelled locally, it had cost next to nothing too. Even though we never ended up making it to Matanzas, we had the most fantastic few days in Viñales.

I think the lessons we learnt from that day were persistence and flexibility. We could have easily given up and headed back to our casa in Havana, but we may have had the exact same issues the following day, and wasted more precious time. Also if we’d been set on going to Matanzas we would have been forced to stay an extra day whether we went by train or bus. The lady at the Viazul office obviously thought we were crazy by wanting to get on the next bus, wherever it was going! But being so flexible worked out perfectly for us and Viñales ended up being one of the highlights of our whole Cuba experience!