How to Find Cheap Backpacking Accommodation in Cuba

How is it possible to have the opportunity to stay with locals rather than forking out for a hotel room? Cubans are allowed to apply for a licence which lets them rent out a spare room or two in their house, by paying an annual tax to the government. This kind of accommodation is known as a casa particular and there are many all over Cuba. They can be spotted by a little white sticker with two blue triangles, usually located on the door or window of the house. 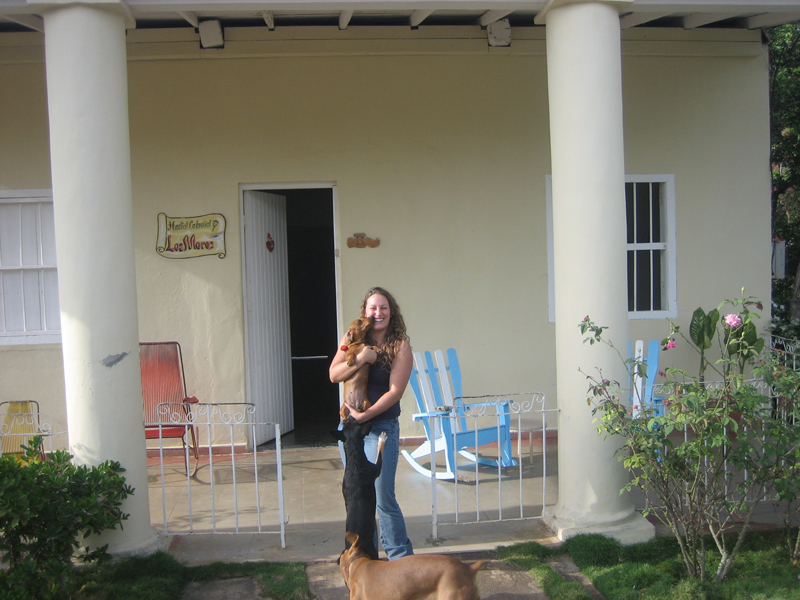 There are many advantages to staying at a casa particular and while the main one may seem to be the price (starting from as low as $10 for a room), backpackers will soon find that being given an insight straight into Cuban life is just as valuable. I stayed with many different families during my trip, some of whom treated me like their long lost daughter! My friend and I were welcomed in with beaming smiles, and invited to take part in as much of the family life as we wanted to. As well as the great reception, our rooms were always spotlessly clean and sometimes came with an adjoining bathroom.

Check whether meals are included (usually only breakfast and/or dinner) as this can be a great way to taste some local cuisine. We were always given a mouth-watering selection of fresh fruits, eggs and coffee for breakfast, and dinner was a huge feast. Sometimes the amount of food was a little intimidating, and our gracious hosts would insist we try a little of everything! It was usually a choice of fish or chicken, with an abundance of side dishes such as rice, beans and yucca, as well as fresh fruit juices.

Another reason that casas particulares are such a great option is that your hosts can provide you with tonnes of info about what to see and do in the area, and sometimes will offer you lifts or tours to various places. Make sure you agree on, or are aware of, the price first, as otherwise you may find these little ‘favours’ a surprise when added to your bill later. Teenagers will also be able to tell you where the coolest and cheapest places to party in town are!

We only had a couple of not so nice instances while using casa particulares during our whole three-week trip around Cuba. One was a rather creepy man who seemed to hover outside the rather see-through bathroom door whenever we showered. The other was when some toiletries were stolen from our luggage. However we had left our bags in the hallway after checking out, so we probably should have found somewhere more secure or taken them with us. Another possible downside could be the language barrier; try and learn at least a few Spanish sentences and bring a dictionary or phrase book.

At the beginning of our trip we flew into Havana and had already arranged our first night’s accommodation by phoning a casa particular we found in a guide book. After that night we didn’t bother booking anything in advance but preferred to turn up, wander around, and knock on a few doors. It meant we could compare prices and see what the hosts were like before committing to anything. Usually there will also be some casa owners waiting at the bus terminal with pictures of their place. However be careful to watch out for jineteros (touts) who will pretend to own a casa, but instead get paid a commission for the one they lead you to (which you will end up paying for)!

There are also many casas particulares listed online nowadays so it’s easy to book in advance if you prefer. Take a look at sites such as My Casa Particular, Cuba Junky or Casa Particular for information, photos, and contact details. It’s pretty much guaranteed that all of these places will be more expensive than the ones you’ll find if you just turn up, so that’s something to be aware of if you’re on a tight budget. Also flexibility really has something to be said for when backpacking. We changed our plans numerous times, which we wouldn’t have been able to had we booked in advance. With so many lovely casas particulares available, we felt completely comfortable just turning up in a new town or village with nothing booked.

One response to “How to Find Cheap Backpacking Accommodation in Cuba”